The Vow From Hiroshima
Not Just A Survivor, LLC., 2019

The Vow from Hiroshima is an intimate portrait of Setsuko Thurlow, a passionate survivor of the atomic bomb in Hiroshima. She was 13 years old when the atomic bomb was dropped (in Hiroshima.) in 1945. Her moving story is told through the lens of her growing friendship with a second-generation survivor, Mitchie Takeuchi.

Setsuko was miraculously pulled out of a fiery building after the bomb was dropped and unable to save her other 27 classmates who were burned to death alive. That experience shaped her life forever and she endeavored to keep a pledge she made to her friends – that no one should ever again experience the same horrible fate. Trailer

Radio Bikini reveals the often-forgotten story of one of the most tragic chapters of the nuclear age. Bikini Atoll was a peaceful tropical island in the Pacific Ocean when it became host to a series of atomic tests conducted by the U. S. in 1946. Though initially thought to be harmless, these tests left Bikini Island uninhabitable for over 40 years and exposed thousands of U. S. Navy sailors to heavy doses of radiation.

Atomic Cafe is a sometimes hilarious, sometimes sobering collection of film clips taken from American propaganda films of the 1950s. We are shown vignettes from such classic instructional films as Walt Disney’s Duck and Cover, wherein school children are assured that they will survive a nuclear attack simply by huddling together next to the schoolhouse wall. In another sequence, a pack of pigs are dressed in Army uniforms and left to die at “Ground Zero” during a nuclear test to see if human beings (who purportedly have the same skin consistency as pigs) could endure such an ordeal. The thrust of the production is to expose the misinformation dispensed by the government concerning the atomic bomb. Watch Film – Pay per View

Atomic Mom is a portrait of a mother-daughter relationship defined by a moment in history — the United States atomic bomb legacy. Through revealing interviews with Japanese survivors, doctors, and historians, Atomic Mom reveals the truth regarding the post-war press code in Japan and the censorship of images and information related to the bombing of Hiroshima and Nagasaki. The film also questions what is lost when the drive for scientific innovation runs over basic moral and ethical principles. In Japan, Hiroshima hibakusha Emiko Okada and her daughter reveal their personal story with an allegiance to peace and reconciliation, fostering an interesting parallel between the filmmaker and her mother. Trailer

B is For Bomb
Carey Schonegevel, 2004

Center for Asian American Media. Winner of the Cannes 2006 online competition, this 10 minute short (adapted from the longer film The Original Child Bomb) reflects on current nuclear issues, as seen through the eyes of a young girl. Well suited for the classroom. Watch Film

This film is based on the world famous manga “Barefoot Gen” by Keiji Nakazawa, and portrays life in Hiroshima after its atomic bombing through the eyes of a child. This film encapsulates the spirit of a nation to overcome the destruction of the atomic bomb and is a testament of strength to its survivors. Keiji Nakazawa attracted widespread attention in 1973, when he published the first installment of his semiautobiographical manga (comics), Barefoot Gen. Nakazawa was 6 years old in August 1945, when the atomic bomb was dropped on Hiroshima. Most of his family was killed in the blast, and the artist survived through sheer luck. Nakazawa’s continuing story now fills seven volumes (nearly 2,000 pages). In addition to two animated features (also written by Nakazawa), three live-action films and an opera have been based on Barefoot Gen.

Children of Hiroshima is a perfect movie to show the devastation caused by the atomic bomb in particular and war in general.  A recent NY Times Review excerpt: “Kaneto Shindo’s Children of Hiroshima was released in Japan in 1952, when the memories of World War II and the dropping of atomic bombs on Hiroshima and Nagasaki were still fresh and painful. A sense of immediacy, or working through recent and almost unfathomable trauma, is palpable in the film, much of which was shot in Hiroshima itself. Mr. Shindo has been overshadowed, at least in the West, by some of his predecessors, peers and successors: filmmakers like Kenzo Mizoguchi, Akira Kurosawa and Shohei Imamura. subject that would preoccupy, both directly and obliquely, so much of postwar Japanese cinema…”

Winner of the Grand Prize at the Sundance Film Festival and recipient of a national Emmy Award for Outstanding Individual Achievement in News & Documentary, Dark Circle follows the trail of plutonium from the Rocky Flats Nuclear Weapons facility in Colorado, to the Diablo Canyon Nuclear Power Plant in California, to Hiroshima and Nagasaki in Japan. Plutonium, the most toxic substance in the world, links these locations and the people whose lives are irrevocably changed by it. Trailer

Dr. Strangelove or: How I Learned to Stop Worrying and Love the Bomb
Stanley Kubrick, 1964

A dark comedy that satirizes the folly of nuclear deterrence. The story concerns an unhinged United States Air Force General who orders a first strike nuclear attack on the Soviet Union. It follows the political ramifications and back-and-forth between the President of the United States, his advisors, the Joint Chiefs of Staff, and a Royal Air Force (RAF) officer as they try to recall the bombers to prevent a nuclear apocalypse. It separately follows the crew of one B-52 as they try to deliver their payload. In 1989, the United States Library of Congress deemed the film “culturally significant” and selected it for preservation in the National Film Registry. Trailer

Grave of the Fireflies
Isao Takahata, 2002

Isao Takahata’s powerful antiwar film has been praised by critics wherever it has been screened around the world. When their mother is killed in the firebombing of Tokyo near the end of World War II, teenage Seita and his little sister Setsuko are left on their own: their father is away, serving in the Imperial Navy. The two children initially stay with an aunt, but she has little affection for them and resents the time and money they require. The two children set up housekeeping in a cave by a stream, but their meager resources are quickly exhausted, and Seita is reduced to stealing to feed his sister. The strength of “Grave of the Fireflies” lies in Takahata’s evenhanded portrayal of the characters. A sympathetic doctor, the greedy aunt, the disinterested cousins all know there is little they can do for Seita and Setsuko. Their resources, like their country’s, are already overtaxed: anything they spare endangers their own survival. As in the “Barefoot Gen” films, no mention is made of Japan’s role in the war as an aggressor; but the depiction of the needless suffering endured by its victims transcends national and ideological boundaries. Trailer

Nominated for an Academy Award, John Junkerman’s documentary film captures the artists Iri and Toshi Maruki in their decades-long collaboration to create a testament to the effects of the atomic bomb — the Hiroshima Panels, which have been viewed by over 100 million people around the world. Haunted by the memories of Hiroshima after the atomic blast, the Marukis began a series of monumental paintings depicting what they had seen. With engaging interviews and extended sequences of the Marukis at work, Hellfire reveals a message of hope in our nuclear age, and is a reminder of the power of art to render visible and meaningful what still seems unimaginable.

Hiroshima No Pika by Noriaki Tsuchimoto and John Junkerman is an animated film made by Noriaki Tsuchimoto based on the award-winning children’s book by the Japanese artist Toshi Maruki. Through Maruki’s heart-rending but beautiful water color illustrations, the film tells the story of a young girl and her family who live through the horrific bombing of Hiroshima. While the horror lies in the reality of the story, the beauty of the film’s articulation creates a sensitive and affecting movie for children and their parents to engage in together. Narrator Susan Sarandon, a longtime supporter of anti-nuclear war campaigns, lends her talent to this historical yet timely story, inspiring children to remember Hiroshima in the hope that it will never be repeated.

Into Eternity’ is an exquisite film that shows the unsustainable challenges of storing nuclear waste. In Finland, the world’s first operating repository for high-level radioactive waste is being hewn out of solid rock— a huge system of underground tunnels— that must last through natural disasters, human-made disasters, and societal changes for **more than** 100,000 years. Captivating, wondrous and thought provoking, this feature documentary takes viewers on a journey never seen before into the underworld and into the future. It asks whether humanity is ready to handle radioactive waste that remains toxic forever, and if not, why should we be making more? Trailer

Threads is a faux-documentary account of a nuclear holocaust and its effect on the working class city of Sheffield, England; and the long term effects that nuclear war would have on civilization. It is a British television drama produced by the BBC in 1984. The primary plot centres on two families, the Kemps and the Becketts, as an international crisis between the United States and the Soviet Union erupts and escalates. As the United Kingdom prepares for war, the members of each family deal with their own personal crises.

The Ultimate Wish focuses on the moving testimony of Nagasaki survivors and Fukushima evacuees. Their stories are interlaced with experts illuminating the largely unrecognized connection between nuclear weapons and nuclear power. Archival footage, some of it disturbing, puts their comments in riveting context. The documentary raises profound questions about war, technological failure, radioactive contamination, proliferation, the courage to survive and the importance of taking action to prevent future nuclear disasters.

In fifty black-and-white-minutes, The War Game depicts the prelude to and the immediate weeks in the aftermath of a fictitious Soviet nuclear attack against Britain. The chaos of the prelude to the attack, as city residents are forcibly evacuated to the country, leads to the story’s centre in Rochester, Kent, which is struck by an off-target missile aimed at RAF Manston and the Maidstone barracks. The results of that missile’s explosion are the instant blinding of those who see the explosion, the resultant firestorm caused by the heat wave, and the blast front; later, the collapse of society, because of radiation sickness, psychological damage, and destroyed infrastructure; the British Army burns corpses, while police shoot looters during food riots.

When the Wind Blows
Raymond Briggs  and Jimmy T. Murakami, 1986

With the help of government-issued pamphlets, an elderly British couple build a shelter and prepare for an impending nuclear attack, unaware that times and the nature of war have changed. When the Wind Blows is a hybrid of drawn animation and stop-motion animation. The characters of Jim and Hilda Bloggs are drawn, but their home and most of the objects in it are real objects that seldom move but are animated with stop motion when they do. The soundtrack album features music by Roger Waters and David Bowie (who performed the title song), Genesis, Squeeze and Paul Hardcastle.

Featuring interviews with fourteen atomic bomb survivors, many of whom have never spoken publicly before, and four Americans intimately involved in the bombings, White Light Black Rain provides a detailed exploration of the bombings and their aftermath. In a succession of riveting personal accounts, the film reveals both unimaginable suffering and extraordinary human resilience. As global tensions rise, the unthinkable now seems possible. The nuclear threat has become real and frightening. White Light Black Rain, by Academy Award-winning filmmaker Steven Okazaki, presents a unblinking look at the first time nuclear weapons were used in war. Trailer

In Hibakusha Stories volunteer Kathy Sloane’s sixteen-minute film, Witness To Hiroshima, Japanese citizen Keiji Tsuchiya tells of his experiences in Hiroshima as a 17-year-old soldier during the month immediately following the dropping of the atomic bomb and relates those experiences to his subsequent life-long commitment to saving the Japanese horseshoe crab and its habitat. 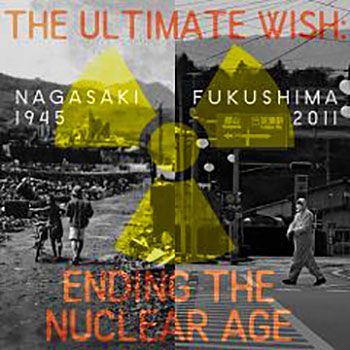 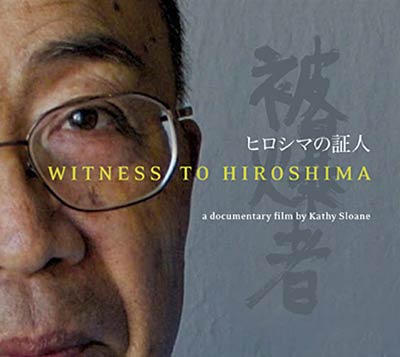