Fifteen in total, the Hiroshima Panels are monumental, folding wood panels completed by Japanese couple Iri and Toshi Maruki over a span of thirty-two years, from 1950-1982. In a classic byobu format, vacillating between photographic realness and abstraction, the panels complicate, challenge, and deepen common perceptions of the nuclear bombing and its aftermath. 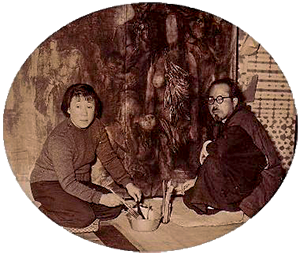 The Hiroshima Panels, depicting a deeply moving portrayal of the indescribable suffering visited upon the more than 300,000 people who died in Hiroshima and Nagasaki, were painted by husband and wife team Iri and Toshi Maruki over a 32-year period.

Iri was born in Hiroshima and lost many family members in the bombing. Along with his wife Toshi, they arrived in the city three days later to find appalling, unspeakable destruction that haunted both of them for the rest of their lives. Being able to translate those scenes into paintings allowed them to learn to live with their painful memories, and bear witness to the devastating human-made disaster — in hopes that it would never happen again.

The exhibition is at the center of a series of programs at Pioneer Works that explore the discourse between art and trauma. Pioneer Works thanks Kathleen Sullivan, PhD, and Robert Croonquist of Hibakusha Stories for their support in the organization of the exhibition and related programming.