I Survived The Atomic Bomb In Hiroshima

I Survived The Atomic Bomb In Hiroshima

… and This Is What I Want You To Know

Over seventy years ago the United States military dropped the first atomic bomb on Hiroshima, Japan. An estimated 140,000 people died, more than half of them in an instant.

Three days later, the U.S. would drop a second bomb, this time on Nagasaki, Japan, killing an estimated 70,000 people. The Japanese government surrendered less than a week later, formally ending World War II. But to this day, researchers still do not know the true number of victims of the atomic bombings.

Many of the people who survived that day — known in Japanese as the hibakusha — were too ashamed or devastated to share their experiences.

Artist Toshiko Tanaka was one of them. She was walking to her elementary school with a friend at 8:15 a.m. when the bomb fell. Despite witnessing death and devastation, she never spoke about the day’s events for most of her life — even to her own children. But when she turned 70, Toshiko said she realized she had to speak out, both to honor the dead and also to urge the next generation to work for a nuclear-free world.

Toshiko shares her story with Refinery29 from Hiroshima, where she still lives today.

“I remember that day very clearly. I was six years and 10 months old at the time. I left the house in the morning and I was with my friend. And, suddenly, my friend pointed to the sky and said, ‘Look, there is a plane in the sky.’ And we were all looking up at the plane in the sky, and then, all of as sudden, we saw a flash and it was like a strong, strong light. I automatically covered my eyes with my left arm, and that’s why my arm, neck, and part of my face had very, very severe burns. I remember what happened during the rest of that day as well, and it was terrible.”

We [children] were all looking up at the plane in the sky…we saw a flash and it was like a strong, strong light.

What happened right after the bomb fell?

“I was badly burned and suffering the effects of the bomb, but I was still able to walk home. When I got home, my house was destroyed but my mother was there, but my mother could not recognize me. She could not see it was me because my hair was all charred and grizzled, and my skin was burnt and charred. My face and my body were totally black.

“During that day, I saw many people walking out from the center of town past my house. They were all escaping and their clothes were burned, their bodies were charred, they had charred faces and charred hair. Many of them had no clothes on because it had all been burned from the bombing.

“That evening, I fell unconscious, and I was unconscious for three to four days, and I don’t remember much about those days. But I clearly remember the bomb being dropped.”

To this day, when I see a barbecued tomato, I get goose bumps…[what] I saw that day were human bodies that were barbecued just like a tomato.
What were the next days and weeks like? When did help arrive?

“I had a younger sister; she was struck by debris and a shard of glass was stuck in her forehead, and they had to remove it later. She always bore that scar.

“Obviously, no help came that day and it did not really come for months. The hospitals were damaged, a lot of the doctors had died, and there was only makeshift help. People sliced cucumbers and put it on their skin and tried to soothe their burns with what they had. But real help didn’t come until months later — I remember seeing the first doctors from Switzerland coming with medication to help the survivors.”

It became very difficult for us to get married, because men did not want to marry someone who had been hurt by the bomb.

Did people know the full devastation of what happened in Hiroshima?

“No. The American government and the Japanese media told people not to talk about the effect of the atomic bomb for six years. They were kept from talking about what had really happened by the government, and by powerful people. People outside Hiroshima were told that the damage was not so bad, that there was not so much destruction, and that things were back to normal. All those things were untrue.

“Additionally, people who survived the bombing received great discrimination from the other people of Japan, because they didn’t know about the hibakusha or what we suffered. For us, the women, it became very difficult for us to get married, because men did not want to marry someone who had been hurt by the bomb. The men feared that women like us could not have children or would give birth to children that were paralyzed or disabled.”

Are survivors able to talk openly about what happened to them today?

“A couple of weeks before the bomb fell, my family had moved from our old home in the center of Hiroshima to two kilometers away. That is what saved us. But all of my friends died in the bombing that day.

It is so important to make friends with a lot of people around the world and plant the seeds of peace.

What do you want young people to know? What call to action do you offer them? 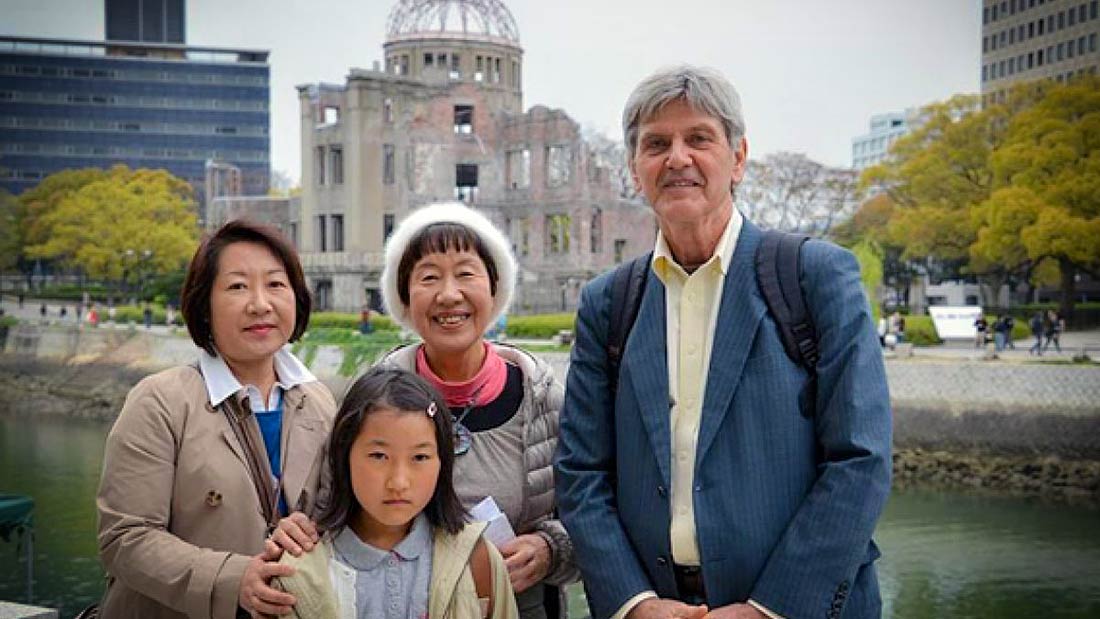 Toshiko Tanaka, center, her daughter, Reiko, her granddaughter, Eri, and Steven Leeper, a peace activist, stand in front of the atomic bomb dome in Hiroshima. In 2014, Toshiko made a speech advocating for an end to nuclear weapons worldwide. Photo: Courtesy of Toshiko Tanaka.