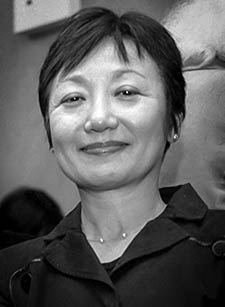 Mitchie grew up in Hiroshima and has made New York City as her home for over 25 years as a media consultant.

Her grandfather, Dr. Ken Takeuchi, a military surgeon, was the founding president of Hiroshima’s Red Cross Hospital from 1937 to 1947. Both he and his daughter, Takako Takeuchi, Mitchie’s mother, survived the dropping of the A-bomb in Hiroshima on August 6, 1945.

As a teenager in Hiroshima, Mitchie volunteered to assist Leona Row, the American resident director at the World Friendship Center, a peace community center founded by Barbara Reynolds, the renowned Quaker peace activist. During that time, Mitchie was instrumental in aiding Leona translate and publish Unforgettable Fire: Drawings by Atomic Bomb Survivors, published in 1977 by NHK, which is considered a classic in the anti-nuclear movement. As a next generation hibakusha, she tells the story of her grandfather, who struggled to manage operations at the Red Cross Hospital under catastrophic conditions to help A-bomb victims despite his own serious injuries. Today, the ICRC (International Committee of the Red Cross) has concluded that there is no effective means of assisting a population that is devastated by nuclear detonation.