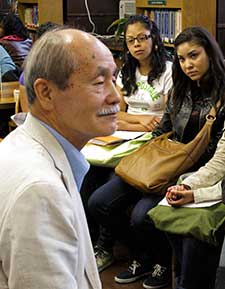 “I was exposed to the atomic bomb at the age of four, about 2.5 kilometers away from the hypocenter in Hiroshima. My father, mother, older sister, younger brother and I were living there.

“On August 6th, 1945, it was a beautiful morning. At 8:15 am, after my father and my sister already left for work, one nuclear-bomb was dropped on us, and instantly, thousands of people were incinerated and the rest were seriously burnt and injured. The city turned into a hell. By the end of 2009, an estimated death toll due to Hiroshima nuclear bomb reached 140,000—about a half of the population living in Hiroshima on the day.

“I am actively involved in the Hiroshima Nagasaki YES Campaign. I would like you to listen to my testimony in your schools and at other events.”