Excerpted from a speech Jong-keun Lee san gave to a U.S. audience: 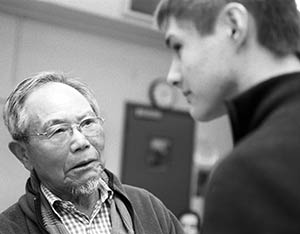 “My name is Jong-keun Lee. I am a permanent Korean resident in Japan. I am very grateful to be here in this big beautiful country, the United States of America. It is an honor to meet young generation like you and to share my experience of the atomic bombing.

“I started working at a mechanics’ workshop for steam locomotives when I finished the elementary school at the age of fourteen. I believe most of you today here are over fourteen. This year, I have become eighty-five years old. Sixty-eight years have passed since the atomic bombing, and 6th of August is approaching again this year. I will attend the peace memorial service to console the souls of the victims of the atomic bombing and to prey for lasting peace.

“My house at that time was located about 16km from the workshop. We used to live in the suburbs of Hiroshima city. That’s why I used to commute to Hiroshima by train. That morning, I missed my usual train and instead took a tram. After getting off the tram at the station near my work place and crossing the bridge, I was exposed to the atomic bombing. It was a clear summer day with the glaring sun and no cloud in the sky.

“All of a sudden, a strange yellow light pierced though my eyes. At the same time, I heard my hair burning behind my head. I thought it was a flare bomb. So I covered my eyes, nose, and ears with my both hands and kept lying low on the ground. That is why I didn’t hear the explosion of the atomic bomb. I was very scared. Time passed while I was lying down trembling. Finally, I lifted my head cautiously. It was supposed to be bright summer morning, but it was pitch black. The air was filled with dust from the houses destroyed by the blast. Though it was impossible to see anything, it started to brighten gradually after a while.

“I stood up and looked for my lunch box without success. I ran around and found it. It had been blown off about 20m. I couldn’t find my hat or glasses after all. Since I thought it was dangerous to wonder around on the road, I immediately sought refuge underneath the bridge. There were already four to five adults seeking refuge there. One of the adults said, “it must have been a new kind of bomb”. But I didn’t know what he was referring to.

“It wasn’t until another adult told me, ‘the skin of your face is turning red’, that I started feeling pain. I started to feel the same pain on my hands, feet, and neck. I thought it would be useless to stay there. So I decided to trot off to my workplace. I encountered people asking for help from underneath the rubble on the way. Women, children, and men underneath the destroyed houses were crying for hands and rescue. But I was only sixteen and didn’t know what to do. I was in pain and fear. I didn’t know what was going to happen to me. All I wanted was to be in a safe place before anything else. I literally ran away while hearing many voices crying for help.

“On the way to my workplace, I saw someone lying on the ground. I called out to that person but there was no response. ‘He is dead.’ There was nobody around. When I ran into my workplace, I found my colleagues well and welcoming me. They must have been inside the building and escaped from direct exposure to the atomic bombing. They came to me and said, ‘you are burnt. Oil is good for healing burns.’ Then they started putting oil from the locomotive engine on my face, feet, hands, and neck. My face was all black from the oil. When the oil seeped into my burns, it hurt. It hurt so much that I cried, and at the same time thought about my parents if they were fine.

“I left for home around four in the afternoon. Four of my colleagues were on the same way. We started walking together on the road, which was burning still. To go home, we couldn’t avoid but going near the epicenter. The first thing that came in sight was a burnt horse. It seemed sad. What we saw thereafter was charred human bodies on both sides of the road.

“We needed to cross several bridges to get home. Many victims were gathering at the foot of the bridge. Many were burned black, their clothes destroyed and hanging down from their body, and bleeding from the back and the chest. Women, children, and men were crying. ‘Please give me water.’ ‘Please give me water.’ They were groaning and stretching their arms and hands out asking for water. People were staring at us thinking that their parents, brothers, or relatives might pass. We hurried home in silence without knowing what to do.

“I believe it was around eleven at night when I arrived home. ‘I am home.’ But my parents were not there. My younger brother told me that my parents went to my workplace in Hiroshima city to look for me. My brother said that he was hungry, and I hadn’t eaten all day either. Since our mother was away, we didn’t know where to find food. We were waiting for our mother to come home. I couldn’t help but crying because of the pain in my burns.

“There was no operating hospital at that time. However, there was one tiny hospital for railroad workers in our suburb. Luckily I was a railroad worker, so I could receive medical treatment for free. However, there was no medicine for burns. Instead, they put Mercurochrome, a red colored liquid antiseptic containing organic mercury compound. When you put it on the burns, they dried and form scabs. I used to take the scabs off by looking at the mirror. But it is impossible to see the back of my neck even with the mirror. My mother used to put the Mercurochrome there. Smelly fluid was coming out of the burn at the back of my neck. The flies laid eggs in the fluid and soon maggots were crawling on my neck. My mother used to pick off the maggots one by one with bamboo forceps. While doing so, she was sobbing and talking to herself. ‘Where is your dignity as a human being with maggots crawling over you living body? Your face, hands, and feet will never be the same again. I almost wish you were dead, so that you can at least rest in peace.’ I felt her tears on my cheek and her warmth. I felt her heartrending sorrow, which made me sad and cry.

“Picking off the maggots became an important routine of hers between the housework. Everyone of my family helped me to get well. It took about 4 months for me to heal. And I got well and could return to work.

“There was absolutely nothing left in Japan after the war, and it was a cruel period. We survived by sharing little that we had. Japan managed to recover and now we live in peace. Yet we face a lot of challenges. You may remember the Fukushima nuclear accidents from two years ago. That was a disaster brought upon by nuclear power. This terrifying nuclear power cannot coexist with this planet or us humans. Today, people around the world are taking action to abolish nuclear weapons and stop nuclear power plants immediately. I will keep on fighting with people around the world to restore this beautiful planet Earth.”