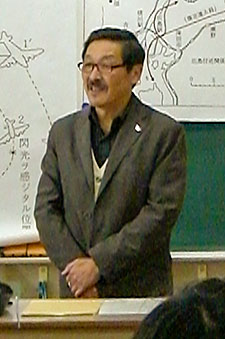 “There are three hibakusha in my family, namely my mother, my sister and me. My mother who was 26 years old at that time rescued the injured victims and escaped from the bombed city carrying my 2 year-old sister on her back. All of us strolled around where we had once lived near the center for few days after the bombing.

“My mother often told me that the scene at that time was not the scene of something on earth. The swollen faces could not be recognized due to the burns with 20-100cm burned skin dangling down from the top of the fingers. When we offered our hands to the injured persons for help, their skin peeled off. Since there was neither medicine nor doctors, the only thing which my mother could do repeatedly was to wash the wounds with water and wipe them. Due to the hot summer, our wounds were infected with maggots and the maggots had to be taken off with chop sticks. What the rescue persons could do was only to speak helpless, encouraging words.

“The corpses of the victims who died one after another were gathered in a dry riverbed and burned by pouring gasoline on them. Among such corpses put in the fire were those who were still breathing. They burst into yelling and finally passed away.

“This is the forth time I will be giving my testimony in the United States. I spoke my experience in Omaha, Washington DC in 2003, in New York during the NPT Review Conference in May 2005 and in Santa Fe/Los Alamos in August 2005.

“The nuclear bomb is an evil weapon which can never co-exist with human beings. Let us work together hand in hand for materializing a nuclear free and peaceful world.”