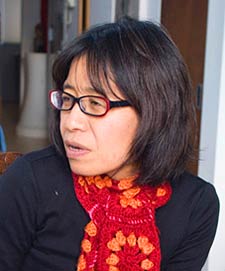 Second Generation hibakusha from Nagasaki, Miyako Taguchi san delivered the following address to the Agape community of Massachusetts on October 10, 2010:

“Thank you for giving me the opportunity to speak for peace and nuclear abolition today.

“My name is Miyako Taguchi. I am of the second generation of the nuclear bomb survivors from Nagasaki. Both my parents experienced extreme hunger, grief and horror due to the war and the nuclear bombing. I have deep respect for my parents not only because they have survived unspeakable conditions but also because they have become righteous persons regardless of their horrible experience. As their child, I believe, I have been passed on the responsibility to speak out for peace and nuclear abolition. Never we should repeat such immoral events, mass destruction and war,  killing and making innocent people suffer both mentally and physically and forever contaminating our earth.

“For many people, the atomic bombings in Hiroshima and Nagasaki are just events in a history book and the Second World War was ended on August 15 in 1945. For me, the war is still ongoing.

“I grew up in near the epicenter, Urakami district. The Urakami Cathedral where I used to pray was once completely destroyed and the parishioners and the priests who were celebrating for the Assumption of the Blessed Virgin Mary at that time were all killed. (wikipedia) The Nagasaki Peace Park that I used to play in with my friends was once completely covered by black debris and radiation.  The Urakami River I walked by every day was once filled with dead people and an unspeakable rotten odor. How can we forget the scenes of such horror?

“However, such a tragedy can happen again because we have over 23,000 nuclear weapons world wide today. I said, ‘We’ because it does not matter which country possesses the nuclear weapons. It is the global community’s problem. We all will suffer from the effects of nuclear bombs as Japanese did 65 years ago.

“It was the hot summer of August 9th, 1945. Cicadas were screaming as if they were urging people to escape from Nagasaki, but people did not hear them. My father who was 17 years old at the time was working at a big shipyard in Kawanami, 5 miles from the epicenter. However, on that  day, he stayed home at Mizunoura, 2 miles from the epicenter because of a leg injury. At 11:02 a.m., when he was sitting at a porch he saw a bright light, and heard the explosion. His house was shaken fiercely and the roof began to fall. He heard people screaming and the loud noise of destruction everywhere. My father and his family escaped to an air-raid shelter, walking through the debris and smoke. After a while, the radioactive black rain from the A-bomb cloud began to fall on them and contaminated acres of Nagasaki city.

“As my father and his family fled to Kurosaki, his father’s hometown, 8 miles from the epicenter, he saw the land covered with black ashes and debris.  All the buildings and houses were burned, nothing remained of what he remembered as his city. He saw the black corpse piles.  He could not tell the humans apart from animals. Severely burned people with their skin and flesh hanging from their bodies were begging for water.  “Give me water! Please give me water!” However, my father  did not have clean water and he knew if he gave them water, people would die instantly from the shock. The hovering smell from the burned debris and dead bodies penetrated everything.

“After some years, the Japanese were told the atomic bomb had targeted the Mitsubishi  shipyard  very close to my father’s house, but the strong wind carried it 2 miles to the epicenter. If there hadn’t been the wind, my father and his family would have had no chance to survive at all and I would not have been here today.

“While my father was struggling to escape from the burned Nagasaki city, my mother was caring for her sister and brother who suffered from losing their hair, fever, and severe diarrhea. My mother was 11 years old, living in Aikawa, a small town by the sea, 4.5 miles from the epicenter. She and her sister were laughing by the window when they saw the bright light growing like a huge sun. Her sister who was facing the bright light suffered most. My mother was just behind her and did not show the same symptoms. Her father piled newspapers under her sister’s lying body because the diarrhea fluid with blood came out of her body endlessly. Her father collected the strong smelling fluid in a bucket and went to a toilet repeatedly. All my mother’s family feared losing loved ones by a mysterious disease, remembering the loss of their mother from tuberculosis at the time of the war.

“Life after the atomic bombing and the war brought even more pain to the survivors. Both Nagasaki and Hiroshima lost their ability to function. They were no longer cities where people could live.  All survivors struggled to get clean water and food and shelter to sleep under while they suffered the tremendous fear and sadness in their minds. They had lost their families and friends and yet people were still dying from unknown diseases without much medical treatment. Many young female survivors were afraid to marry and to get pregnant because there were many cases of stillbirth and deformed babies.  Other Japanese in general began to be afraid of being in contact with the A-bomb survivors. Therefore, most of the survivors hid their experiences with the nuclear bombings in order to get jobs and to marry, suppressing  their sadness and anger inside because of the discrimination against them in Japan. After 65 years in Japan, the survivors and their families are still suffering from radiation poisoning.

“My father suffered a great deal from his leg injury for long years after the war.  A doctor  told him he needed to cut his leg, but he was lucky to find another doctor who cured it even though he is crippled a little. The terrible experience left my parents with permanent scars, not only physical but also mental. Although he was in general trusting and generous, my father was often very short tempered and violent. My mother was frequently crying and unhappy with her marriage and life. I grew up wondering why my parents were still together while they could not get along, why my father often abused his children and wife while he insisted we go to church, and why my mother regretted everything.

“However, when I became an adult, I began to see whole picture of their lives, how the scars from the war changed their lives and characters and how much they were trying to survive and to be righteous in spite of their pains and difficulties. I have also begun to realize that their scars are parts of me due to having lived with my parent’s contradictions. My father who had worked hard whole his life as an engineer, passed away from cancer just after he retired. He was 63 years old.

“The two nuclear bombs that attacked Hiroshima and Nagasaki killed over 210,000 innocent people by the end of 1945. Thousands of people evaporated into the hot air when 572,000 degree Fahrenheit heat attacked them, no bones and no hairs were left. Thousands of dead bodies were left to rot without being able to reach their families.

“It is said that there are over 400,000 victims of the two atomic bombings. Among the people who were killed, there were mothers and fathers, daughters and sons, grandmothers and grandfathers, babies and unborn babies.  If we lay down all victims’ bodies, it will cover the half city of Manhattan. Imagine seeing the city covered with endless dead bodies. Imagine your family members and friends among them.

“The citizens of Nagasaki and Hiroshima are not the only victims of the use of nuclear weapons. In Iraq they have used depleted uranium bombs causing many local people to die from leukemia and cancers. The nine countries with nuclear weapons contaminate our earth and kill people on account of nuclear testing and accidents every year.

“For what did these innocent people need to die? For the victory of the war, for the satisfactions of people in power, or for personal wealth?

“We can’t change our horrible past, but our future is on our hands. Even though we can’t bring back the 400,000 A- bomb victims to life, even though we can’t cure the pains and agonies that they went through, we can stop this mass destruction from happening again.

“We all deserve peace in our lives. Learning from our history, it is obvious that wars and nuclear weapons will never give us peace, but love and compassion will. We should forget which country we belong to or which country we were born. We all are residents of the Earth. While my parents were showing me their strength to live as survivors, they also taught me how to be humble and to care for others. Moreover, they never criticized America, they spoke out against war.

“This May, Hibakusha Stories, an initiative that passes the legacy of the atomic bombings of Hiroshima and Nagasaki to a new generation, visited 3,000 high school students in five boroughs in New York City. Hibakusha means atomic bomb survivors. When I listened to their testimonies in person I was chilled and lost my words.

“Please visit some testimonial websites such as the Nagasaki City web site and read survivors’ testimonies. They will definitely change your life and raise your hope for peace. Please understand that the survivors tell their stories hoping for world peace even though their memories bring them back to unspeakable pain.

“Thank you very much for coming and listening to my story.”