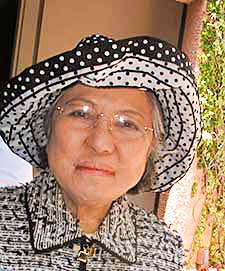 Shigeko Sasamori san was 13 years-old when the atomic bomb was dropped on Hiroshima. Hearing the sound of a plane, she looked up to see a B-29 flying overhead — seconds later she was knocked unconscious by the blast. When she came to, she was so badly burned that she was unrecognizable. Shigeko repeated her name and address over and over until she was finally found by her father. Years later she would travel to the United States in 1955 as part of a group of young women known as the Hiroshima Maidens. While in New York, she underwent numerous plastic surgery operations and met her adoptive father, Dr. Norman Cousins. Her story is featured in Steven Okazaki’s award winning film White Light Black Rain.

Here are some links to learn more about the life and work of Shigeko Sasamori: