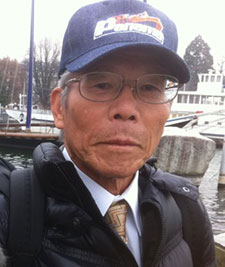 Shoso Hirai san was exposed to the atomic bomb in Hiroshima when he was 16 years-old. He was born on July 20, 1929. Mr. Hirai was exposed to the atomic bomb at his friend’s house, 4 kilometers from the epicenter, while going to a munitions factory as a mobilized student. He entered into the city center the following day to look for his father who had gone to work and his younger brother who was also a mobilized student. He only found his father’s bones and his younger brother is still missing.

He now actively takes part as a peace volunteer to guide people around the Hiroshima Peace Memorial Museum and Peace Memorial Park. He is active in the Association of Citizens for Supporting South Korean Atomic Bomb Victims and with the Hiroshima Interpreters for Peace.