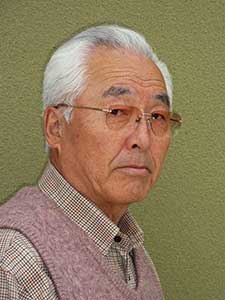 “When 16 month-old, I was exposed to the nuclear bomb. Luckily, I was not in Hiroshima when the bomb was dropped. I arrived two days later when my mother entered into the inferno Hiroshima, carrying me on her back. My mother determined to find my father who stayed in Hiroshima city on that day. It was a desperate wandering for a mother and her child to find the one we loved from the piles of corpses.

“Later, we could reunite with my father who miraculously survived the bomb. Although he suffered from acute radiation syndrome, he did not come down with any serious disease. My whole family survived chaotic aftermath of the war.

“Despite poverty, I was healthy and happy in my early years. I completely forgot the fact that I am a Hibakusha. I married my wife when I was 23 years old and got two healthy boys.

“Then, all of a sudden, 40 years after the bomb, my 16 year-old younger son came down with acute leukemia and died in one year.

“My son’s death reminded me that I am a Hibakusha. I was so scared of the nuclear bomb— the bomb damaged our genes and deprives the lives of the second and the third generation of Hibakusha. I abhor atomic bombs.