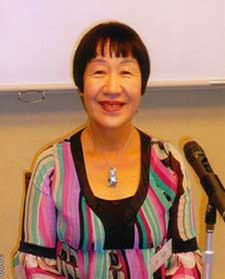 “What kind of person did you image when you heard you were going to meet ‘a 72 year-old survivor of the Atomic bomb?’ Do I look in better shape than you imagined?

“Until recently I never talked about my dire experience of the atomic bomb even to my own children. One of the reasons is because I always wanted to forget about it and wanted to live cheerfully with positive spirit. The other reason is I hated to make people sad when I talk about my experience. But I realized I can never get away from it.

“I am expecting a surgery on both my eyes within a month, and I am suffering knee pain when I use stairs even after a surgery on my left knee. Burn scars on my body have faded with time, but emotional scars will never fade.

“I am a professional craft artist. By putting my messages against nuclear weapons and my wishes for the peace into my art works, I ease my emotional pain…”

On December 23, 2013, Toshiko Tanaka shared her hibakusha story with students at Booker T. Washington High School in Tulsa, OK. Through an initiative of Youth Arts New York, her journey was underwritten by grants from the U.S. Japan Foundation and the Japan Foundation’s Center for Global Partnership. This kamishibai, created in the classroom of Jennifer Dix Brown, tells part of Toshiko’s story.

…and I was right under that atomic cloud. I was 6 years and 10 months old and was walking to my elementary school. It was 2.3 km from Ground Zero. There was a warning that American bomber planes, B-29’s, were coming. And at the moment I looked up the sky, I was attacked by the high heat rays and blinded by the flash. At once, I covered my face with my right arm so I got severe burns on my right arm, head, and left neck. I could not understand what had happened. It was pitch dark around me. This was caused by the dust of the bomb blast contaminated by radioactivity, which is called an atomic cloud. Soon I felt the severe pain of my burned skin. I came back to my house crying. The house was totally destroyed by the blast. My mother was safe at home but could not recognize her own daughter because my appearance had completely changed. My hair was frizzy by the heat, my face and feet were dark by the dust, and my clothes were torn like rags. I remember that I saw a beautiful blue sky through the broken roof.

“After a while, I saw a great number of mortally injured people staggering towards the direction of my house. They were trying to escape. Many of them had their own skin burned and peeled, hanging down from the tip of their fingers. They were dead silent and looked like a procession of ghosts. I also saw many little children following the crowd. They had lost their parents. Many of them squatted abruptly, and died on the spot. Just one explosion of the bomb turned the city into a ruin. 140,000～200,000 citizens were killed in Hiroshima. In Nagasaki, about 60,000 were said to be killed. The tragedy does not end there. Those who luckily survived and their future generation will suffer the after effect of the radiation for the rest of their lives.

“From that night, I got a high fever and was in a coma for a week. With all the doctors and hospitals gone, my mother thought I was going to die. When I regained consciousness, my town was covered by the horrible smelling smoke coming from the schoolyards and parks because massive dead bodies were cremated there everyday.

“Soon after, many bizarre things happened on the survivors’ bodies. Many people who looked unhurt started to have purple spots on their skin, their hair fell out and their gums began to bleed. And suddenly they died. At the time, my father was drafted and was not home. My mother, although our house was destroyed and was having difficulty herself, sheltered some homeless survivors in our house. We had moved into that house just 6 days before the atomic bomb was dropped. Our original house was located at Ground Zero. We felt we were kept alive by divine being.

“Among those my mother sheltered, I remember two sisters. One was around 15 years old and the other 5 or 6 years old. The older sister looked well and she fled carrying her younger sister, who was severely burned, on her back. However the older sister died soon, and the younger survived. At that time we did not know the existence of radioactivity. Everyone wondered why people died.

“All 6 members of my uncle’s family were killed by the bomb. My aunt who was in her twenties left home earlier that morning and has never returned until today. There were 12 young American soldiers held captive in Hiroshima at that time. All of them were killed by their own nation’s atomic bomb.

“Have you peeled tomatoes in hot water when you make salad? The same thing happens to the human body. Our skin peels by heat. Whenever I see tomatoes, the nightmare comes back to my mind.

“Nuclear weapons not only cause damage on people directly, but they also produce genetic defects through radioactivity. Many deformed babies were born afterwards. As soon as babies were born, parents checked if they did not have defects by checking numbers of their babies’ fingers and toes. My husband and many other fathers did the same thing.

“Have you ever heard a story of Sadako? Sadako was 4 years younger than I and we attended the same middle school. She survived the bomb when she was 2 years old, and was all fine until she suddenly suffered leukemia when she was 12 years old. She folded more than 1,000 paper cranes wishing she would recover from the illness, but her prayer was never achieved and she passed away. In my case, I started to suffer several disorders when I was about 15. I would become unconscious all of a sudden and faint. Also I suffered mouth ulcers, sore throat and herpes labialis all of which have annoyed me for a long time. Unlike other members of my family, I have suffered poor eyesight since I was struck by the flash of the bomb.

“There was a time when talking about the damage caused by the atomic bomb was considered a taboo under the agreement of the governments of U. S. and Japan. Many survivors held their experiences inside and did not talk about it. They feared if they did talk, it would only work against them. They feared prejudice might put a stop to their children’s marriage plans. And they thought nobody except those who actually survived will understand them anyway.

“I now talk about my experiences in public. What do you think changed me? One of the reasons is that I do not want any of our children and future generations to experience what I have been through. From 2007 through 2009 I went on board of Peace Boat twice, and visited more than 30 countries of the world. During the voyage I met and talked with many children and young people who were victims of war all over the world. Despite the difficulty, they were trying to live positively. I started to feel a responsibility to get into action as a Hibakusha; Action to make the world peaceful without fear of dropping bombs, and action to keep the sky above our children and young people always blue and beautiful. I have many wonderful friends here in the U. S. I wish the sky above them would be beautiful and nuclear free as well. I wish that we will be the last survivors of nuclear weapons. If this wish is shared with people all over the world, I believe that some day we can accomplish a nuclear free world. I think it is important to start to love your family first, then stretch those chains of love to your friends and neighbors. It is my utmost pleasure if you agree with me and start creating your own chains of love and peace.