The mission of Hibakusha Stories is to pass the legacy of the atomic bombings of Hiroshima and Nagasaki to a new generation, empowering them to build a world free of nuclear weapons. ‘Hibakusha’ is the Japanese word for atomic bomb survivors and is also used to identify other people across the globe who have been affected by radioactive violence, including: Indigenous Peoples, Downwinders, nuclear test survivors, Atomic Veterans and others whose lives have been impacted by nuclear technology, from mining uranium, to nuclear weapon and nuclear power production and use to nuclear waste burial. 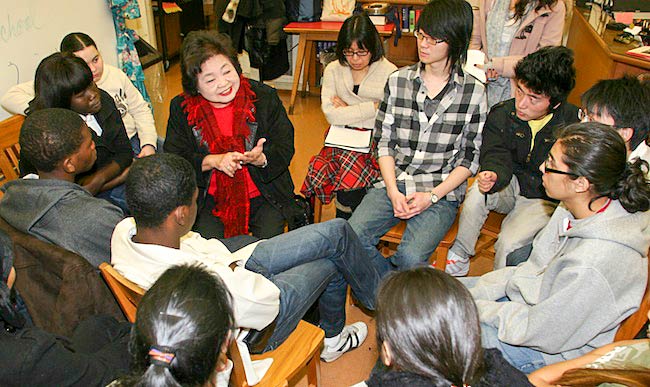 Young people today are increasingly concerned about nuclear weapons. Given the turbulent geopolitical climate and an escalating arms race, the threat and risk of nuclear weapons’ use is on the rise. Although five of the nine nuclear armed states, in a joint statement issued on January 3, 2022, vowed to never use nuclear weapons, that promise was short-lived. After Russia invaded Ukraine in February 2022, nuclear threats have been made between Russia and NATO nations, with Russia asserting that it had the right unleash its nuclear arsenal against non-nuclear nations. France followed with threats of their own when Foreign Minister Jean-Yves Le Drian countered Putin stating: “I think that Vladimir Putin must also understand that the Atlantic alliance is a nuclear alliance. That is all I will say about this.”

The fear of nuclear weapon use has been further compounded by the Russian occupation of the Zaporizhzhia nuclear power plant, the largest nuclear energy complex in Europe, with 6 nuclear reactors. Russian forces are essentially using the nuclear complex as a “shield” and heavy artillery has damaged infrastructure, causing the site to shut down, creating power outages and insecurity throughout the region. The exchange is proving the terrifying maxim that nuclear power plants are “pre-deployed weapons of mass destruction.”

Not since the 1980s have young people in the US, and in many countries across the globe been so engaged in proactive conversations and demonstrations for nuclear abolition. Hibakusha Stories has worked over the last decade to elevate a dialogue about disarmament, empowering teachers to develop curriculum and students to take action.

In 1982, over one million people gathered in New York City’s Central Park to call for nuclear disarmament.  This was the time of the US television film The Day After which depicted a fictitious city in Kansas under nuclear attack, the bomb exploding and its aftermath. This film and other cultural responses to the nuclear arms race had a profound effect on public opinion. All over the world, countries were taking the nuclear issue to popular culture too, through a host of films, plays, comic books, curricula and TV programs. In the 1980s, nuclear fear was real.

Although there are far fewer nuclear weapons on the planet than during the height of the Cold War nuclear arms race in the 1980s, there are still an estimated 12,700, enough to destroy our world many times over.  And unlike the superpower arms race, dominated by the US and former Soviet Union, nuclear proliferation has long-since spread from the original five nuclear armed states (US, Russia, UK, China and France) to India, Israel, Pakistan and North Korea.

Over the last decade, to address the still escalating problem of nuclear proliferation, the International Campaign to Abolish Nuclear Weapons (ICAN) has galvanized disarmament advocacy and activism. After three successful state sponsored conferences in Norway, Mexico and Austria focusing on the humanitarian impact of nuclear weapons, in December 2014, the Austrian Government unveiled the “Austrian Pledge” to fill the legal gap for the prohibition and elimination of nuclear weapons. Later referred to as the Humanitarian Pledge, it was supported by 127 nations, united in a call to nuclear armed states — and those who stand with them — to begin a real-time process for nuclear disarmament.

This movement has properly reframed the issue of nuclear weapons. National posturing based on classes of weapons, deployment and deterrence credibility is being rightly replaced by the issues of humanitarian and environmental consequences.  The dawn of a nuclear weapons prohibition has finally arrived, when on July 7, 2017 the United Nations adopted the Treaty on the Prohibition of Nuclear Weapons (TPNW) — the most significant advancement for nuclear disarmament in a generation. The TPNW comprehensively and categorically bans nuclear weapons and associated activities, including nuclear weapon use, threat of use, testing, development, production and possession. It establishes positive obligations to assist victims of nuclear weapons use and testing and to remediate contaminated environments. In tune with Hibakusha Stories’ mission, the treaty recognizes the importance of peace and disarmament education. The TPNW explicitly frames nuclear weapons as “abhorrent to the principles of humanity”, contrary to international humanitarian law, as well as a threat to human rights, the environment and the global economy. It also emphasizes the disproportionate impact of radioactive violence on women and girls, and Indigenous Peoples.

For our work to promote nuclear abolition, through collaboration between UN member states and NGOs to create the treaty, ICAN was awarded the 2017 Nobel Peace Prize. Hibakusha Stories’ long time collaborator Setsuko Thurlow travelled to Oslo to receive the Nobel, together with Beatrice Fihn, Executive Director of ICAN in Geneva. Their powerful lectures can be accessed here.

Hibakusha Stories has been involved in ICAN from its inception. In 2007, our Director Kathleen Sullivan was invited to Australia, were the campaign originated, to take part in its inauguration and roll out as a public speaker for youth and general audiences. Part of her first work for ICAN was to write a series of disarmament education lesson plans that were featured on the campaign’s initial website. Throughout the years of the humanitarian initiative, Kathleen has accompanied Setsuko and supported her work internationally. Tireless activism by ICAN campaigners across the globe made history when on January 22, 2021 the Treaty on the Prohibition of Nuclear Weapons entered into force. In a statement delivered to celebrate this milestone, Setsuko said: “I cannot truly express with words my feelings of overwhelming gratitude. How we have struggled in spite of being confronted by indifference and ignorance! How we have struggled in spite of being ridiculed by nuclear armed and nuclear dependent states! In spite of that and more, we have made it to this point — nuclear weapons are now illegal under international law!”

With the treaty’s entry into force, citizens around the world are calling on their elected representatives to re-double their efforts to eliminate nuclear weapons by signing and ratifying the TPNW. To date the treaty enjoys 91 signatories and 68 states parties.

Author, activist and Hibakusha Stories educator Joanna Macy argues that “the danger constituted by nuclear weapons is greater now than at any time in our history.  We do an immense disservice to young people and their future, unless we provide them with a confident understanding of nuclear issues.”

Where disarmament education and nuclear studies are missing in the curriculum, Hibakusha Stories fills that gap.  Following the basic guidelines of NYS Standards-based education and the Common Core Curriculum, we introduce disarmament education so it will become a mainstay in standard curriculum for secondary school students, better providing young people with a ‘confident understanding’ of the nuclear threat. We call it Reading, Writing and Radiation.

Hibakusha Stories has provided programming in high schools and universities in the New York Metro area and beyond reaching more than 50,000 students; has facilitated staff development for NYC high school teachers in disarmament education in collaboration with UN Office for Disarmament Affairs; has organized testimony sessions for UN guides to augment their knowledge, as well as produce community wide events that include play readings, concerts, film screenings and art exhibitions and other cultural fora that infuse the hibakusha testimony with the arts.

We live on a planet in peril.  Our survival in the 21st century will be dependent upon knowing the nuclear threat and finding the power to abolish these planet-destroying weapons before they are used again. Support the treaty. Get involved. 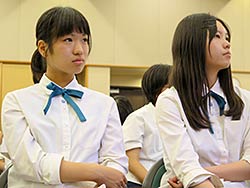 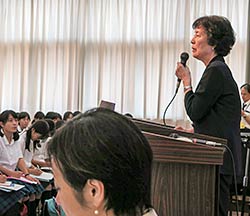 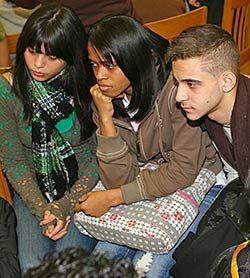 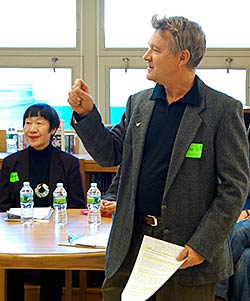 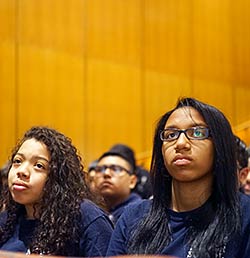 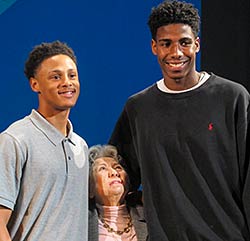 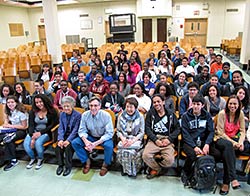