Compelled by her memories of nuclear destruction, Setsuko Thurlow has become an international advocate for nuclear disarmament. She will be recognized and honored by the Nuclear Age Peace Foundation at their 32nd annual Evening For Peace on October 25th at the Four Seasons Biltmore.

Thurlow took time to grant Casa Magazine an interview via email and shared her thoughts about a lifetime living with her memories and the images from surviving the nuclear bombing of her beloved Hiroshima, Japan, in August of 1945.

CASA: From where do you draw your strength?

Thurlow: After crawling out from the rubble of a collapsed building, I saw streams of ghostly figures, slowly shuffling from the centre of the city towards the nearby hills. They did not look like human beings; their hair stood straight up, their clothes were tattered or they were naked; they were bleeding, burned, blackened, and swollen. Parts of their bodies were missing, flesh and skin hanging from their bones, some with their eyeballs hanging in their hands, and some with their stomachs burst open, with intestines hanging out. We students joined the ghostly procession, carefully stepping over the dead and dying. ere was a deathly silence broken only by the moans of the injured and their pleas for water.
A er such an experience, I had to seek meaning for everything. I was full of questions. I sought answers for the pain and agony I had felt and witnessed. My unforgettable memories are a motivating force, as well as the selfless, courageous people who were desperately trying to assist fellow human beings — these things drive me to speak out on the evil of nuclear weapons.

CASA: What has been the most effective method of raising awareness of the need to disarm nuclear weapons?

Thurlow: I do not have a special technique. I share my memories. I share the facts. It is reality-based and honest. What I share is
not a theory or an abstraction. I am a human voice and face to what happened in Hiroshima on August 6th 1945. I try to make my past experience relevant to peoples’ lives today. For example, I speak about the folly of war; spending billions on weapons that cause untold destruction while squandering resources for schools, hospitals, housing homeless people and helping care for our environment. I urge people to take appropriate action… and to get rid of these monstrous things called nuclear weapons — get rid of all of them.

CASA: How do you bring remembrance together with forgiveness?

Thurlow: To me the evil of the nuclear age, is not just Hiroshima and Nagasaki, but over the past 70 years, without regret or remorse, Nuclear Weapon States continue to create the conditions for the extinction of people and the planet. To depend on nuclear weapons through the practice of deterrence is totally evil and intolerable. Unfortunately, therefore, forgiveness does not come easily for me. As I always say to students when they ask me, “have you forgiven Americans?” — it was a small group of decisionmakers in the United States that made that choice. American citizens were in the dark like all of us. But to continue to depend on deterrence after all we know, this mentality, this dependence on nuclear weapons is unforgivable and unacceptable.

CASA: How has the United Nations assisted in the gathering of nations to sign the disarmament treaty?

Thurlow: The United Nations has a mandate for disarmament. It is enshrined in the UN Charter, “to save future generations from the scourge of war.” However, in 45 years since the Nuclear Non Proliferation Treaty was first introduced, we have seen little progress. In spite of the years of increasing frustration over this lack of action for nuclear abolition, for the first time I feel most hopeful about the potential for a
dawn to the nuclear night. It’s because of the mounting momentum generating since 2010 to reframe the narrative away from technocratic military concerns to rather focus on the humanitarian consequences of nuclear weapons, with the result being a strong push for a Ban Treaty to achieve the prohibition and elimination of nuclear weapons. International Conferences on the Humanitarian Impact of Nuclear Weapons in Norway, Mexico, and Austria over the past two years have contributed to a rapidly growing global movement with a new bold vision for a nuclear free future.
I am profoundly grateful to see the birth of such a committed and vibrant movement taking on the most urgent challenge of the day.

CASA: Is there anything additional you would like to say?

Thurlow: Albert Einstein said “The splitting of the atom has changed everything, save our way of thinking, and thus we drift toward unparalleled catastrophe.” We have to acknowledge that we live in the nuclear age. We need to understand that the use of nuclear weapons by accident or design could end all life on earth. We have the ability for collective total suicide. There is no human security as long as nuclear weapons exist. I simply appeal to the people of the world to accept the moral obligation to work for disarmament, to live in peace, and create a just and sustainable society. I am 83 years old and until my last breath I will remember what happened in Hiroshima and Nagasaki and share my story in order to help people understand — and by understanding take action for our survival.

From Hope to Action 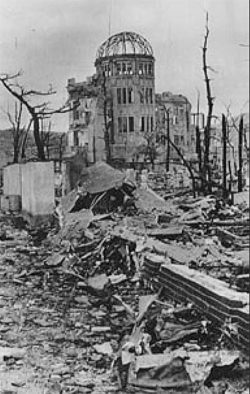 On Sunday, October 25th, the Nuclear Age Peace Foundation will present its 2015 Distinguished Peace Leadership Award to Setsuko Thurlow, a Hiroshima hibakusha (atomic bomb survivor). The presentation will be made at the Annual Evening For Peace, to be held at the Coral Casino at the Santa Barbara Biltmore.

The Distinguished Peace Leadership Award is presented annually to individuals who have demonstrated courageous leadership in the cause of peace. Setsuko Thurlow began her path to peace following the morning of August 6, 1945 when an atomic bomb was dropped on the city of Hiroshima. She was just 13 years old at the time. An excellent math student, Setsuko had been recruited to work for the Japanese army decoding messages from the front at the army’s headquarters in Hiroshima. August 6th would have been her first day at work.

“How do you describe a Hell on Earth?” she asks. “Within that single flash of light, my beloved Hiroshima became a place of desolation, with heaps of rubble, skeletons, and blackened corpses everywhere.”

For her lifelong efforts for peace, Setsuko has received many honors, including in 2006, membership in the Order of Canada by the Government of Canada and, in 2011, commendation by the Ministry of Foreign Affairs of Japan for her contributions for peace and nuclear disarmament. In 2013, she was named Peace Ambassador by the University for Peace, San Jose, Costa Rica and, in 2014, Kazumi Matsui, Mayor of Hiroshima, presented her with the Hiroshima Peace Ambassador Award. Earlier this year, Setsuko was nominated for the 2015 Nobel Peace Prize.

On October 25, 2015, a few months after the 70th anniversary of the bombings of Hiroshima and Nagasaki, David Krieger, President of the Nuclear Age Peace Foundation, will have the honor of presenting Thurlow with the Foundation’s Distinguished Peace Leadership Award. She joins those honorees who have received the Foundation’s Award before her — the XIVth Dalai Lama, Archbishop Emeritus Desmond Tutu, Jody Williams, Jacques Cousteau, Mairead Maguire, Helen Caldicott, and Medea Benjamin, to name just a few. They are all remarkable leaders who have devoted their lives to the pursuit of peace with integrity, persistence,
energy and passion.

The reception will begin at 5:30pm followed by dinner and the awards program. Sponsorship opportunities for the event are available, including sponsoring students to attend the event.