Survivors Ensure Their Stories Live On

Survivors Ensure Their Stories Live On

August 6, 1945, started out a beautiful day, not a cloud in the sky, and Reiko Yamada and her classmates were lining up outside their elementary school, waiting for class to begin. The morning was blisteringly hot, and some of Yamada’s friends had fainted under the strong sun. Their teacher told them to take refuge in the shade, so they went to the playground and sat under some trees.

That’s when the boys spotted the Boeing B-29.

The four-engine, propeller-driven bomber was a common sight in the skies above Hiroshima during World War II, probably Americans on a routine flyover, they thought. But then it made a U-turn. Moments later, Yamada and her friends saw something in the sky – shiny and silver. “It was beautiful,” she said through an interpreter. Then came the big flash and the blinding light.

What followed in the days, months and years after the United States dropped atomic bombs almost 70 years ago on Hiroshima and Nagasaki, killing between 60,000 and 80,000 Japanese instantly, is a story that Yamada, now 81, has recounted to audiences across the globe for nearly two decades – a story of death and survival, of destruction and regrowth, of regret and hope.

It is also a story that she and other atomic bomb survivors, known in Japanese as Hibakusha, have shared with New York City school children each spring in an effort to offer firsthand accounts of the destruction wrought by nuclear weapons.

“I don’t want people to repeat this mistake,” Yamada told NBC News. “The only anger I have is against nuclear weapons.” 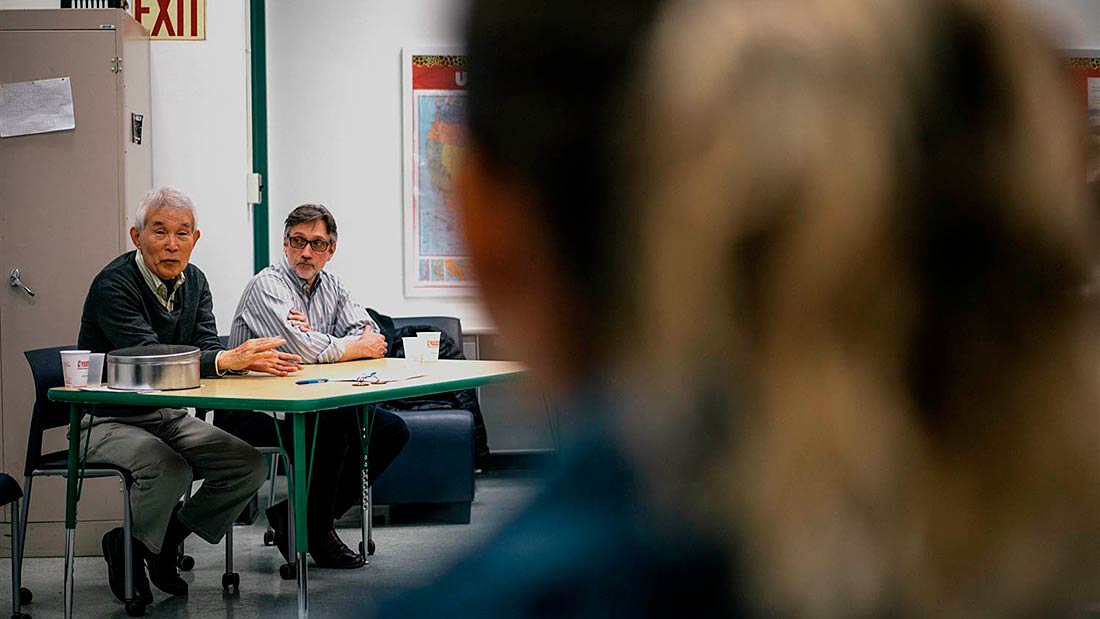 Since 2008, Hibakusha Stories, a non-governmental organization that advocates nuclear disarmament, has raised funds to sponsor atomic-bomb survivors to travel to the United States to share their experiences with school children and college students. This year, through Hibakusha Stories, there are at least 20 Hibakusha visiting nearly 50 public and private schools throughout New York and also in New Jersey, said Jonathan Fluck, a spokesman for the organization.

But as the Hibakusha age, it has become increasingly difficult for many to come to the United States, officially making this the last year that Hibakusha Stories will host the atomic bomb survivors in schools, Fluck said.

For Yasuaki Yamashita, a 76-year-old Hibakusha, the memories of the day the second atomic bomb fell are still fresh. It was hot that morning, and six-year-old Yamashita, who for fun would normally wander off into the mountainside to chase down cicadas and fireflies, was playing by himself outside his home near Nagasaki. Hiroshima had been bombed three days earlier, and Yamashita’s 13-year-old sister had heard on the radio that an aircraft had been flying over the city. She warned her mother, who was preparing the midday meal, to be careful.

“Then my mother called me, in case we had to enter our own shelter,” he said, referring to a space they dug out under their home if they couldn’t make it in time to the fallout shelters in the mountains. “The moment we entered came a tremendous crash, a cloud and lightning at the same time.”

Every Hibakusha’s story of the bombing and its aftermath is shaded with similar memories of carnage and devastation, their experiences adding a layer of human dimension to a historical narrative often couched in injury and death tolls alone.

For Yamada, it was the acrid smell of cremated victims hanging in the air over Hiroshima, the human skulls and bones she and her classmates unearthed the spring after the bombing when they harvested sweet potatoes they had planted, the sight of her father dying of leukemia and lung cancer in an atomic bomb hospital, his lips stuck to his teeth because of a fever that had gripped his body.

For Yamashita, it was the image of a boy with burns on his back who died a few days after the bombing, of his city engulfed in flames that burned for days on end, of his father who fell into a coma for 10 years and died in their home, his illness the result of helping to remove corpses and cleaning up the radioactive rubble to which Nagasaki was reduced.

Eventually, Hiroshima and Nagasaki rebuilt. Yamada got married, had two children and became vice president of Hidankyo, a nationwide organization in Japan that assists Hibakusha, some of whom face discrimination because of their injuries. For his part, Yamashita left Japan in 1968, traveling to Mexico City to report on the Olympics for the Japanese press. He later settled there, learning Spanish and working as a freelance Spanish-Japanese translator and interpreter for Mexican and Japanese companies.

But what happened on those two hot August mornings nearly seven decades ago still haunts many Hibakusha to this day.

“There are still things I haven’t told or I don’t want to talk about,” Yamada said. “For example, there is a big regret that I couldn’t help other people when I was running away from the fire.”

And while those memories may never disappear, sharing their stories can be a catharsis for some Hibakusha. “It was so painful in the beginning,” Yamashita said. “But when I finished my speech, all of a sudden I felt my pain was disappearing. So I said, this is very important, to speak out. It’s a kind of therapy.”

One school visit was particularly poignant for Yamada, the atomic bomb survivor from Hiroshima. She was in Boston some years ago, she said, when a student asked if the United States government had ever apologized for dropping the bombs. Many have made – and still make – the argument that bombing Hiroshima and Nagasaki, while killing and maiming tens of thousands of Japanese, was necessary for bringing World War II to an end. That student had also heard the same argument, she said.

What he did next Yamada would never forget.