Peace Boat US and Hibakusha Stories, two organizations that frequently work together toward a nuclear-free world, recently welcomed delegates from the United Nations, NGO leaders and civil society organizations working on disarmament issues to a reception in New York that gave attendees a chance to view the extraordinary Hiroshima Panels just days before the historic pieces of art return to Japan.

More than 75 people attended the reception on December 16, 2015 at the Pioneer Works gallery in Brooklyn, where they were able to view six of the Hiroshima Panels that were temporarily brought to the United States to commemorate the 70th year since the atomic bombings of Hiroshima and Nagasaki. Sometimes referred to as the Guernica of Japan, the panels depict various themes related to the bombing of Hiroshima, including the immediate horrific aftermath experienced by innocent civilians, the Korean civilians and American prisoners of war who became collateral damage in the explosion, the special way in which loved ones keep alive the memory of those who lost their lives, and the anti-nuclear movement that emerged in Japan several years after the bombing. 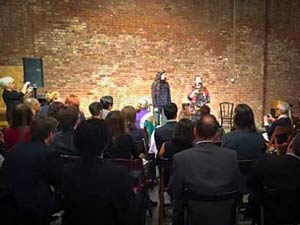 Unique and unprecedented in the world, the panels were painstakingly painted over a 32-year period by husband and wife team Iri and Toshi Maruki, who entered the city of Hiroshima shortly after it was bombed to search for their family members. Although their masterpieces have been exhibited extensively throughout Japan and Europe, they have made precious few appearances in the United States.

This year, the panels completed a brief American tour in the cities of Washington DC, and Boston before being shown at the highly symbolic venue of the Pioneer Works gallery in New York. Occupying a space that once housed one of the largest machine manufacturers in the United States and produced items that supported the military industrial complex, today the Pioneer Works gallery uses the building to transcend traditional boundaries, foster community, and provide a space where alternative ideas can receive support. It served, therefore, as a deeply meaningful venue for an art exhibition focused on disarmament and peace building.

In addition to giving attendees the opportunity to view the artwork as well as atomic artifacts that were also on display, the reception highlighted the success of the United Nations resolution, sponsored by Mexico, to establish an Open Ended Working Group that will develop “legal measures, legal provisions and norms” for achieving a nuclear weapon-free world. The recent vote at the UN is a strong indication that support for a treaty to ban nuclear weapons continues to grow.

The special reception was co-sponsored by Hibakusha Stories, Peace Boat US and the Permanent Missions of Austria, Mexico and Japan to the United Nations, and was made possible through the support of the entire production team at Pioneer Works gallery and the United Nations Office of Disarmament Affairs.