Investigative journalist Eric Schlosser published Command and Control, a book about near nuclear misses over the last seven decades of the Atomic Age. US Military parlance for nuclear related accidents or near-accidents is ‘broken arrows’ or ‘bent spears’. According to an article by Schlosser in The Guardian, “A 1970 study by one of America’s nuclear weapon laboratories, obtained through the Freedom of Information Act, stated that at least 1,200 [nuclear] weapons were involved in accidents between 1950 and 1968.” [Schlosser, Eric (14 September 2013) Nuclear weapons: an accident waiting to happen The Guardian Newspaper, UK.]

There have been many such events that have not only been kept secret, but fundamentally call into question nuclear defense as a practice and philosophy.

One of the most chilling examples was in 1961 when two hydrogen bombs dropped over North Carolina after the plane carrying them malfunctioned in flight.

The US was narrowly spared a disaster of monumental proportions when two Mark 39 hydrogen bombs were accidentally dropped over Goldsboro, North Carolina on 23 January 1961. The bombs fell to earth after a B-52 bomber broke up in mid-air, and one of the devices behaved precisely as a nuclear weapon was designed to behave in warfare: its parachute opened, its trigger mechanisms engaged, and only one low-voltage switch prevented untold carnage. Each bomb carried a payload of 4 megatons – the equivalent of 4 million tons of TNT explosive. Had the device detonated, lethal fallout could have been deposited over Washington, Baltimore, Philadelphia and as far north as New York City – putting millions of lives at risk. [Pilkington, Ed. (20 September 2013) US nearly detonated atomic bomb over North Carolina – secret document The Guardian Newspaper, UK.]

These and other bent spears or broken arrows happen with too great a regularity. [Kristensen, Hans M. (2008) Nuclear Safety and the Saga About the Missing Bent Spear, FAS Strategic Security Blog] Even still, apart from current news items, few students understand the basic facts. They are often surprised to learn that today approximately 15,000 nuclear weapons are owned by nine nations and remain a threat to all life on earth. Many are unaware that nuclear weapons are unique and are not at all like conventional bombs — that these ‘weapons’ cause destruction through the splitting of the atom, which creates tremendous power, called nuclear fission.

Students do not often understand that the primary effects of a nuclear explosion include blast, heat, fire and radiation, producing destruction on an unimaginable scale. The destructive force of nuclear weapons, such as the immense light and thermal heat of a nuclear explosion, is comparable to the interior of the sun. A sun brought down to earth that can initiate firestorms, which deplete oxygen from the environment and create hurricane-force winds that attract debris and feed the storm itself, causing super-infernos that no living being can survive. [Eden, Lynn. (2006) Whole World on Fire: Organizations, Knowledge and Nuclear Weapons Devastation. Ithaca, New York: Cornell University Press]

New research suggests that even a limited nuclear exchange could have world-wide ramifications. Firestorms out of urban areas would send massive amounts of particulate debris into the troposphere, causing global cooling that would adversely effect climate and food production. One billion people could starve as a result. [International Committee for the Red Cross (2013)]. Climate effects of nuclear war and implications for global food production [Information Note 2].

Unparalleled human suffering and the state’s inability to respond to their citizens’ needs would be the inevitable outcome of one nuclear weapon being used in an urban environment. How could emergency services respond to a city on fire? If a 750 kiloton ICBM was targeted over Lower Manhattan, 87 – 143 square miles of New Jersey, Manhattan, Brooklyn and Queens would be engulfed in a super inferno. And that is only the first tier of mass destruction.

All this and apart from the extreme fires and meta-hurricane force winds the least understood effect of nuclear weaponry comes into play, virtually forever — that is, long-lived ionizing radiation. Once released, radioactive elements remain in the environment for millennia upon millennia, putting future generations at risk of developing cancer and genetic mutations. 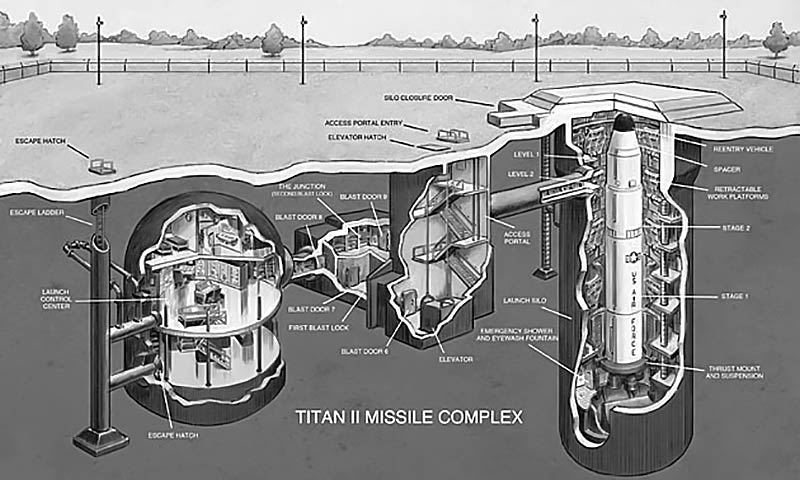 In our pitch for educators to engage Reading Writing and Radiation as subject areas to pursue, here’s a multimedia lesson plan for use in the classroom. Drawing on Eric Schlosser’s new book and the late, great Gill Scott Heron’s interpretation of a nuclear accident in 1966.

Begin class with an interactive exercise, the Opinion Continuum (described below) using the following two statements after your warm up statements (“Chocolate ice cream is the best”, or “the Mets are the greatest baseball team on the planet”, or something fun and easy to get students engaged).

After the Opinion Continuum ask students to read the following text in class:

An article about Schlosser’s book

This can be organized as a group read-aloud or students may read quietly on their own.  After reading, have the students listen to Gill Scott Heron’s song below.

Ask students to discuss the article and lyrics.  Then conduct another similar, Opinion Continuum using the following two statements:

Opinion Continuum:  a teaching tool for expressing opinions in the classroom adapted from Morningside Center for Teaching Social Responsibility.

An “opinion continuum” gives students an active way to consider and express their opinions, listen to others’ opinions, and discuss controversial issues with respect for one another. Begin by establishing some classroom ethics. These might include:

Designate different corners of the classroom as “Strongly agree,” “strongly disagree,” and “not sure, don’t know or no opinion.” Then read a statement and ask each student to react to the statement by moving to the appropriate part of the room.

Begin with a simple statement, such as “Chocolate is the best flavor of ice cream.”  This will help model the exercise so that students feel comfortable with the format.  Then move on to the discussion topics. Below are some possible opinion continuum statements for high school students. Remember that these are statements that a participant can agree with or disagree with.

Ask for volunteers representing different position in the room, to state several reasons why they hold their viewpoint. Make sure to get a wide range of opinions. It is helpful to summarize what students say to make sure all students understand each perspective. It is also helpful to ask open, probing questions to get more information or clarifying questions to help students think more deeply about their own perspective. A variation is to have each speaker summarize the opinion of the previous speaker before expressing his/her own views.

After several students with different opinions have shared their thoughts, ask if anyone would like to change their opinion based on new information. It is important to acknowledge the value of remaining open to new information and being able to change one’s mind when presented with new information. This is the way that we all learn.

A vital part of this lesson is to provide a safe space for opinions that might be unpopular, and an opportunity to change our minds because unlike facts, opinions can change.

A secret document, published in declassified form for the first time by the Guardian today, reveals that the US Air Force came dramatically close to detonating an atom bomb over North Carolina that would have been 260 times more powerful than the device that devastated Hiroshima.

The document, obtained by the investigative journalist Eric Schlosser under the Freedom of Information Act, gives the first conclusive evidence that the US was narrowly spared a disaster of monumental proportions when two Mark 39 hydrogen bombs were accidentally dropped over Goldsboro, North Carolina on 23 January 1961. The bombs fell to earth after a B-52 bomber broke up in mid-air, and one of the devices behaved precisely as a nuclear weapon was designed to behave in warfare: its parachute opened, its trigger mechanisms engaged, and only one low-voltage switch prevented untold carnage.

Each bomb carried a payload of 4 megatons – the equivalent of 4 million tons of TNT explosive. Had the device detonated, lethal fallout could have been deposited over Washington, Baltimore, Philadelphia and as far north as New York City – putting millions of lives at risk.

Though there has been persistent speculation about how narrow the Goldsboro escape was, the US government has repeatedly publicly denied that its nuclear arsenal has ever put Americans’ lives in jeopardy through safety flaws. But in the newly-published document, a senior engineer in the Sandia national laboratories responsible for the mechanical safety of nuclear weapons concludes that “one simple, dynamo-technology, low voltage switch stood between the United States and a major catastrophe”.

Writing eight years after the accident, Parker F Jones found that the bombs that dropped over North Carolina, just three days after John F Kennedy made his inaugural address as president, were inadequate in their safety controls and that the final switch that prevented disaster could easily have been shorted by an electrical jolt, leading to a nuclear burst. “It would have been bad news – in spades,” he wrote.

Jones dryly entitled his secret report “Goldsboro Revisited or: How I learned to Mistrust the H-Bomb” – a quip on Stanley Kubrick’s 1964 satirical film about nuclear holocaust, Dr Strangelove or: How I Learned to Stop Worrying and Love the Bomb.

The accident happened when a B-52 bomber got into trouble, having embarked from Seymour Johnson Air Force base in Goldsboro for a routine flight along the East Coast. As it went into a tailspin, the hydrogen bombs it was carrying became separated. One fell into a field near Faro, North Carolina, its parachute draped in the branches of a tree; the other plummeted into a meadow off Big Daddy’s Road.

Jones found that of the four safety mechanisms in the Faro bomb, designed to prevent unintended detonation, three failed to operate properly. When the bomb hit the ground, a firing signal was sent to the nuclear core of the device, and it was only that final, highly vulnerable switch that averted calamity. “The MK 39 Mod 2 bomb did not possess adequate safety for the airborne alert role in the B-52,” Jones concludes.

The document was uncovered by Schlosser as part of his research into his new book on the nuclear arms race, Command and Control. Using freedom of information, he discovered that at least 700 “significant” accidents and incidents involving 1,250 nuclear weapons were recorded between 1950 and 1968 alone.

“The US government has consistently tried to withhold information from the American people in order to prevent questions being asked about our nuclear weapons policy,” he said. “We were told there was no possibility of these weapons accidentally detonating, yet here’s one that very nearly did.”

How would we ever get over
over losing our minds?
The sheriff of Monroe county had,
sure enough disasters on his mind,
and what would Karen Silkwood say
if she was still alive?