A Toolkit for New Yorkers

Prepared for Rise and Resist and Hibakusha Stories
by Robert Croonquist, MA and Kathleen Sullivan, PhD 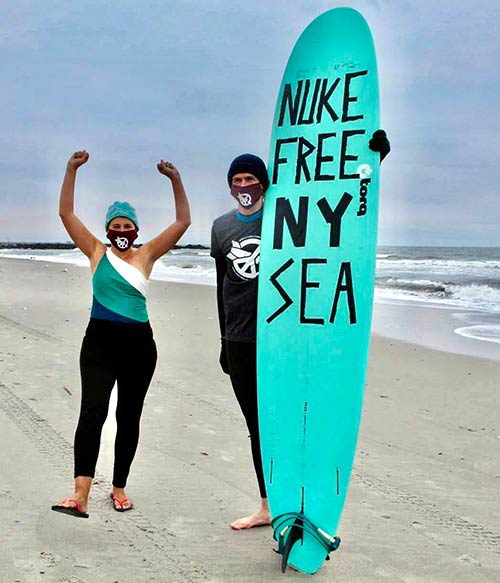 On January 22, 2021 the Treaty on the Prohibition of Nuclear Weapons (TPNW) will enter into force. As 2017 Nobel Peace Laureate ICAN, the International Campaign to Abolish Nuclear Weapons, works with nations to sign and ratify the Treaty, Rise and Resist and the New York Campaign to Abolish Nuclear Weapons (NYCAN) are using this opportunity to draw attention to two pieces of local disarmament legislation which have been sitting on the desk of City Council Speaker Corey Johnson since January 28, 2020, awaiting a floor vote. The resolution and bill both have a veto-proof supermajority of co-sponsors.

It is particularly important that New York City mark this historic occasion when nuclear weapons are finally declared illegal under international law as our city and its institutions were central to the top-secret Manhattan Project that developed the world’s first nuclear weapons, leveling the cities of Hiroshima and Nagasaki and killing hundreds of thousands of people in August of 1945.

NYCAN together with Council Members Daniel Dromm, Ben Kallos and Helen Rosenthal have successfully garnered a veto-proof super majority for RES 976- 2019 and INT 1621-2019. RES 976 calls upon the Comptroller to instruct the pension funds of public employees in New York City to divest from and avoid any financial exposure to companies involved in the production and maintenance of nuclear weapons, reaffirming New York City as a Nuclear Weapons Free Zone and supporting the Treaty on the Prohibition of Nuclear Weapons by calling on the US Government to sign and ratify the Treaty. INT 1621 will create a New York City Nuclear Disarmament and Nuclear Weapons Free Zone Advisory Committee to “conduct a comprehensive review of New York City’s current stance on nuclear weapons,” submitting an annual report for five years including “findings and conclusions and any recommendations for policy or legislation.” The Committee can also “host discussions, public programs and other educational initiatives.” 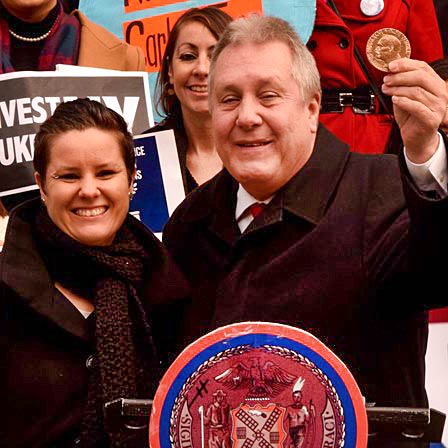 WHAT IS THE TREATY ON THE PROHIBITION OF NUCLEAR WEAPONS?

The Treaty comprehensively and categorically bans nuclear weapons and associated activities, including nuclear weapon use, threat of use, testing, development, production and possession. It establishes positive obligations to assist victims of nuclear weapons use, development and testing and to remediate contaminated environments and recognizes the importance of peace and disarmament education. The TPNW explicitly frames nuclear weapons as “abhorrent to the principles of humanity”, contrary to international humanitarian law, as well as a threat to human rights, the environment and global economy. It also emphasizes the disproportionate impact of nuclear weapon use and testing on women and girls, and indigenous peoples.

Citizens around the world are calling on their elected representatives to show their support for the treaty by re-doubling their efforts to eliminate nuclear weapons. Rise and Resist has joined NYCAN in this effort to remind New Yorkers of the daily risk we live with, as our beloved city is a prime target for nuclear weapon use by accident or by design. 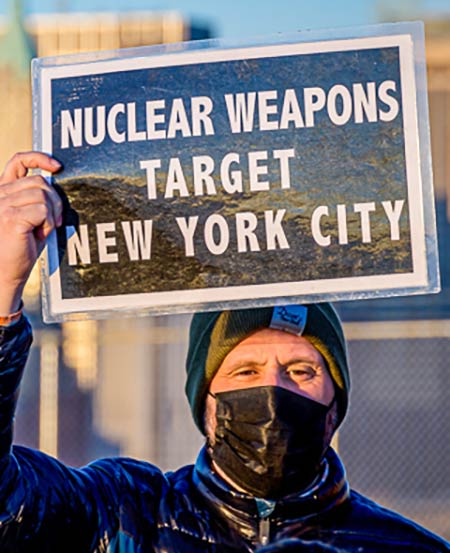 New Yorkers and New York City have a special role to play in disarming the Doomsday Machine. As Dr. Matthew Bolton NYCAN member and Director of the International Disarmament Institute at Pace University describes in a monograph he wrote to educate City Council, New York City was a primary home to the Manhattan Project which oversaw the development of the world’s first nuclear weapons. An alarming two-thirds of the Manhattan Project’s supply of uranium was stored in Port Richmond, Staten Island, at the Archer Daniels Midland Company Warehouse. The Wolff-Alport Chemical Corp stored around 3.75 tons of thorium sludge at in Ridgewood, Queens, now a Superfund site that includes a deli and an auto body shop. Some 150 tons of uranium materials were stored at the Baker and Williams Warehouses on West 20th Street next to the High Line in Chelsea. In 1989 a survey for the Department of Energy found radioactive contamination up to 38 times that which is federally allowed.

Few New Yorkers would know that during the Cold War, New York City was ringed by an archipelago of nuclear weapons, armed with 180 warheads. Two missile bases were within city limits at Hart Island and Fort Tilden. They deployed warheads of up to 30 kilotons (the yield of the Hiroshima bomb was 15 kilotons) right next to the public beaches at Jacob Riis Park. An indication of how dangerous these were to New Yorkers: in November 2001, American Airlines Flight 587, en route to the Dominican Republic, crashed in Belle Harbor, just 2.5 miles from the former Fort Tilden missile launch site.

Are we in even more danger now than we were at the height of the Cold War? Yes! The answer relates to the triple threat of nuclear war, climate chaos, and the demise of democratic institutions. The world watched in horror when, on January 6, 2021, the Capital Building in Washington DC, the seat of US democracy, was stormed by violent insurrectionists. This situation is extremely dangerous and still unfolding. But what became immediately apparent was the twin threat of a volatile leader and his unfettered access to nuclear weapons’ launch codes. In the United States, it is the sole authority of the sitting President to order a nuclear attack, at any time for whatever reason. 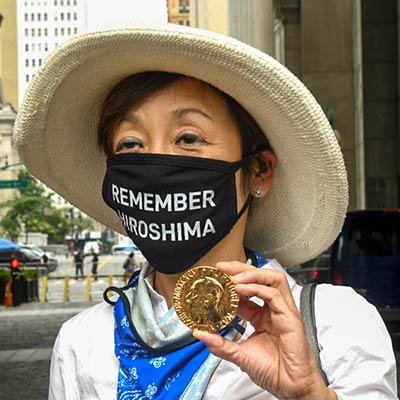 Given this extraordinary danger, on January 8, Speaker of the House Nancy Pelosi spoke with the chairman of the Joint Chiefs of Staff, Gen. Mark Milley, about “available precautions for preventing an unstable president from initiating military hostilities or accessing the launch codes and ordering a nuclear strike.”

“The situation of this unhinged President,” Pelosi wrote, “could not be more dangerous and we must do everything that we can to protect the American people from his unbalanced assault on our country and our democracy.” She later told her caucus she had received assurances that there were safeguards in place, according to a source on the call. It is unclear what those safeguards might be.

Without a doubt, the most dangerous weapons in the world are nuclear weapons. Due to long-lived radioactive contamination, nuclear weapons also poison the land and water for generations to come, increasing the risk of cancer and genetic mutation for all living beings. Not only do they cause overwhelming, unimaginable devastation but recent scientific research reaffirms the concept of “nuclear winter,” finding that even a “limited” nuclear war could cause a global famine.

HERE’S WHAT YOU CAN DO

EDUCATE: yourself, your community and your elected officials on the nuclear threat. Learn more about nuclear weapons and what is being done to abolish them.

At our successful hearing over a year ago, NYCAN activists and allies generated over 400 pages of written testimony and 60 in person testimonies. Transcripts can be found under attachment #6 on the New York City Council website. Click here to find NYCAN’s evidence document, prepared for the January 2020 hearing at City Council. The body of evidence includes:

• research on nuclear weapons;
• reports on divestment from nuclear weapon producers;
• research detailing increased risk to urban areas and the harm nuclear weapons cause;
• articles about nuclear war, militarism and climate chaos;
• information on the health impacts in the US on indigenous people from uranium mining and nuclear testing;
• ecumenical/interfaith resources on nuclear disarmament; and more.

CONTACT: the Office of the Comptroller and ask that the City align its finances with its progressive values. The argument for divestment is laid out in Nuclear Weapons are Risky Business by Dr. Matthew Bolton. We need the Comptroller to educate the City’s pensions managers on what nuclear weapons mean and why continuing to fund their modernization and deployment is the antithesis of what we need to combat COVID-19, joblessness, homelessness, environmental degradation and the multitude of problems we face in the 21st-century. To divest from nuclear weapons would align New York City with a global majority that supports nuclear disarmament and the treaty.

DIVEST: your personal finances. The research project Don’t Bank on the Bomb, part of PAX Netherlands, provides excellent analysis of financial institutions that include nuclear weapons as part of their controversial weapons policies. Don’t Bank on the Bomb regularly publishes the latest information on private companies involved in the production of nuclear weapons and their financiers. Click here for a checklist of what constitutes a good policy. For a list of outstanding financial institution policies, see here.

Make sure your bank does not invest in nuclear weapon producers! NYCAN applauds New York based Amalgamated Bank for their public refusal to invest its money in weapons manufacturers. Amalgamated is part of a movement among financial institutions, internationally, to support the TPNW.

DONATE: Please consider donating to any of the following NGOs, dedicated to nuclear abolition:

Reaching Critical Will: RCW is the one-stop shop for basic facts on disarmament treaties including treaty language and analysis, plus an excellent inventory of country statements, and original research. Staff monitor UN meetings and provide excellent editorials on all UN disarmament fora. Sign up for their daily newsletter during ban treaty negotiations, and find archived research on their content rich site. RCW is a project of the Women’s International League for Peace and Freedom.

International Campaign to Abolish Nuclear Weapons: ICAN is a coalition of some 500 non- government organizations in one hundred countries and territories. ICAN’s work advocating for a strong and effective nuclear weapon ban treaty, the Treaty on the Prohibition of Nuclear Weapons, has been recognized around the world resulting in the 2017 Nobel Peace Prize.

International Physicians for the Prevention of Nuclear War: Focusing on health and medical issues IPPNW was founded by Russian and American doctors during the height of the Cold War. Convinced that nuclear war would be the ‘final epidemic’ they joined together to alert the public to the dangers of nuclear weapons and radiation. In 1985 they were awarded the Nobel Peace Prize.

Institute for Energy and Environmental Research: IEER’s Energy and Security newsletter comprises first-rate research on nuclear non-proliferation, disarmament and energy sustainability, and is available on-line in English, French, Spanish and Russian, with select articles in Korean, Chinese and Japanese.

ACTIVATE THROUGH ART: Engage youth in Art for Disarmament

If You Love This Planet: Setsuko Thurlow’s Speech on the adoption of the Treaty on the Prohibition of Nuclear Weapons, United Nations, NYC by Amber Cooper-Davies & Hibakusha Stories/Youth Arts New York, 7 July 2017.

PRACTICE gratitude. The New York City metro area is blessed with many progressive legislators. We need to engage them on what nuclear weapons mean and why continuing to fund their modernization and deployment is the antithesis of what we need to combat COVID-19, joblessness, homelessness, environmental degradation and the multitude of problems we face in the 21st-century.